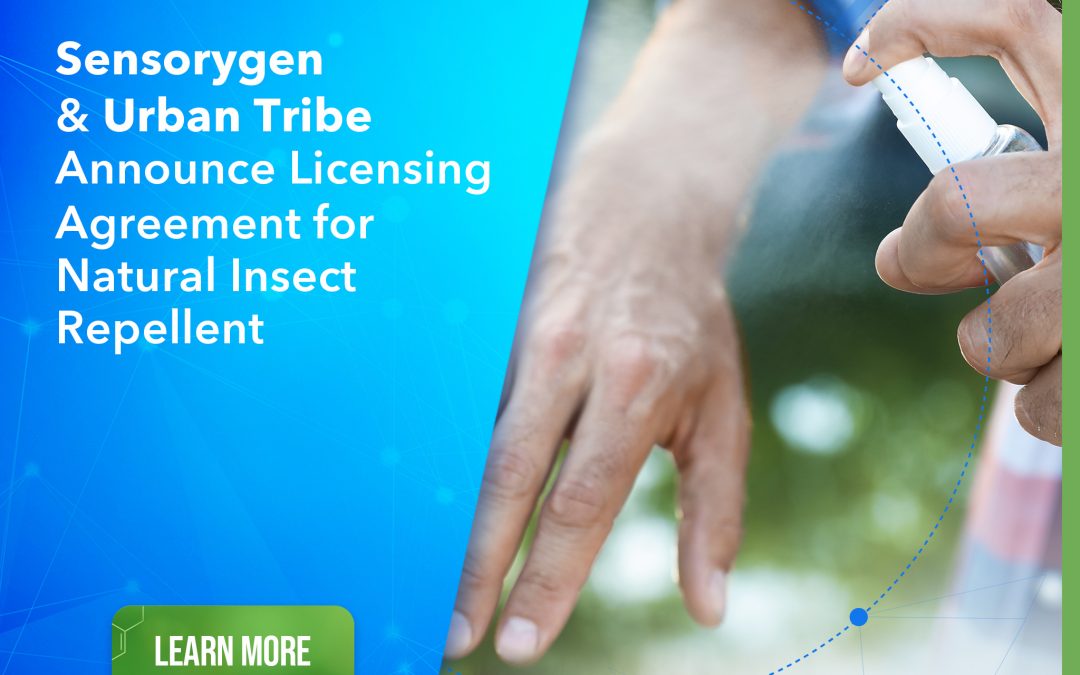 (RIVERSIDE, CA, March 25, 2021) — Sensorygen, a life science startup revolutionizing everyday products by replacing synthetic chemicals with more efficacious, safer, and natural substitutes that are pleasant to use, has entered into a licensing agreement with Urban Tribe, a brand established to enhance the quality of life and health of billions of consumers worldwide. This agreement will bring Sensorygen’s next generation insect repellent – developed for human, household, and home garden applications – directly to consumers.

Sensorygen’s market-disrupting repellent will provide a natural defense against mosquitoes, ticks, gnats, flies, and chiggers, and has proven through independent laboratory testing to be a superior and safer alternative to traditional repellents, such as DEET. This non-toxic natural repellent significantly exceeds the protection time of DEET, does not damage synthetic fabrics or plastics, and is pleasant to smell.

The artificial intelligence-driven technology behind Sensorygen’s offering is based on seminal work from Sensorygen founder, Dr. Anandasankar Ray’s laboratory at the University of California, Riverside (UC Riverside) and is exclusively licensed from UC Riverside.  Sensorygen’s substantial IP portfolio of highly-effective, natural compounds for many insect and human applications allows for the successful replacement of harmful and harsh chemicals in everyday products – from repellents to flavors and fragrances to cosmetics – and more.

Under the terms of the agreement, Sensorygen has granted Urban Tribe an exclusive worldwide license to commercialize the insect repellent, and in return, Sensorygen will receive equity in Urban Tribe, milestone payments, and royalty payments on Urban Tribe sales.

Mosquito borne disease is one of the foremost health issues in the world, with a staggering ~700 million people contracting disease and ~700,000 deaths annually. Urban Tribe’s mission is to enhance the quality of life and health of billions of mosquito-concerned consumers around the world by replacing currently used repellents that utilize harsh chemicals with a completely natural, sustainable, and eco-friendly compound – without loss of efficacy – thereby greatly improving the effectiveness, peace-of-mind, and aesthetic experience of a pleasant-to-use topical mosquito repellent. Urban Tribe – natural mosquito repellency that works!